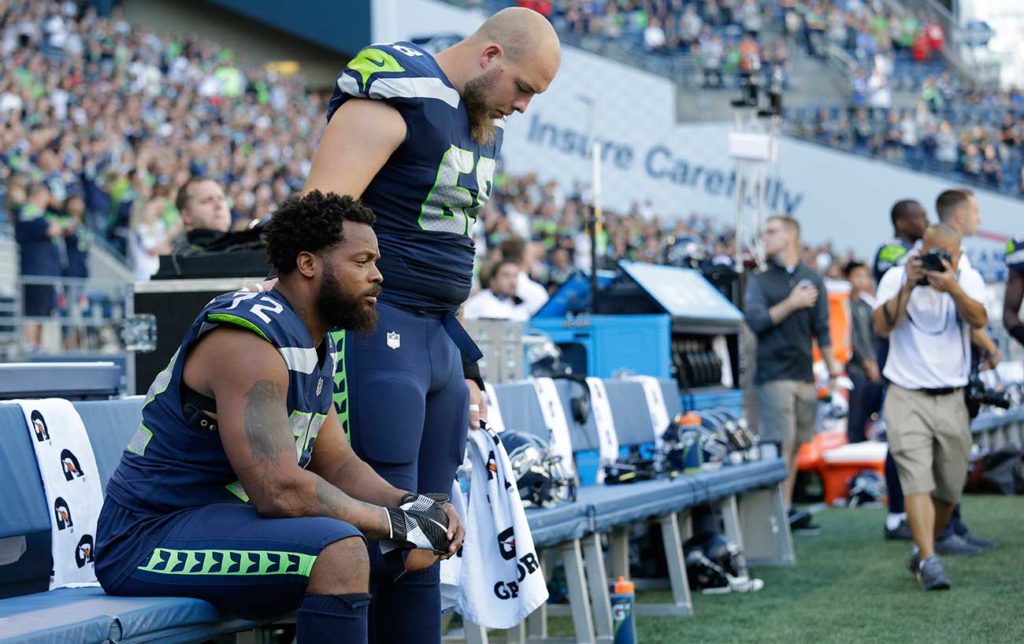 Michael Bennett is one of those spoiled, ungrateful, anti-American/anti-cop NFL football jerks who refuses to stand during the playing of the National Anthem before the start of football games.  And he was in Las Vegas for the big Connor McGregor/Floyd Mayweather fight two weeks ago.

After the fight, the Seattle Seahawks defensive lineman went to the Drai Beachclub at the Cromwell on the Strip to spend some of his millions.  And according to a story in Thursday’s Las Vegas Review-Journal, he and other clubgoers “panicked after statues that were knocked down on a tile floor sounded like gunshots.”

According to the story, Bennett hid “behind a gaming machine” as “officers conducted a sweep of the casino floor searching for a possible shooter.”

“When officers saw Bennett,” the article continues, “he ran outside and jumped a wall into traffic, where he was detained.”  The report adds that “officers thought Bennett may have been involved in the reported shooting.”

Gee, the guy was hiding and then ran away when officers spotted him.  I wonder why anybody might think that maybe, just maybe, he was somehow involved?  Derp.

Naturally, that’s not how Bennett is describing the event.  According to him, officers singled him out “for doing nothing more than simply being a black man.”

Bennett went on to claim that this is “why before every game, I sit during the national anthem – because equality doesn’t live in this country.”

And why (attention advertisers!) I refused to the read the special section in today’s newspaper about the official start of the 2017 NFL season and won’t be watching the kickoff game tonight.  #NFLBoycott.

And the beat goes on…