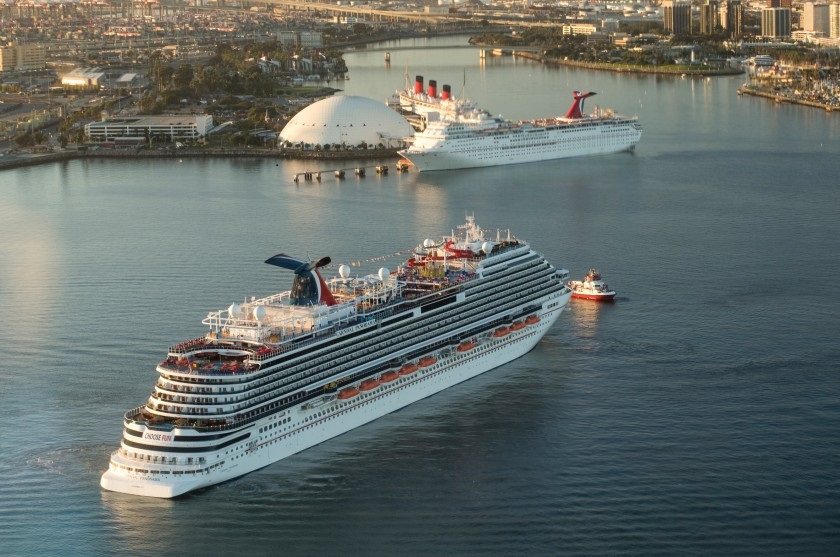 Cruise Industry News reported on Thursday that voyages on the Carnival Panorama – which is the ship we would have been traveling on for Citizen Outreach’s annual Mexican Riviera cruise this past week – is scheduled to start sailing again on May 16.

But as we all know, that’s aspirational and could easily change.

I’m keeping an eye on the situation.  Once cruises DO restart, we’ll figure out when to reschedule the ConservaCruise we otherwise would have returned from yesterday.

So what’s going on with our ship in the meantime?  Here’s an update from the Los Angeles Times…

The newest ship in Carnival brand’s fleet, Panorama, is docked in Long Beach. The 5,000-passenger ship, which was launched in December, began sailing weekly cruises from Southern California to the Mexican Riviera before Christmas.

The vessel had a coronavirus scare in early March when a sick passenger was tested for the disease and cruisers held overnight on board in Long Beach. But the test came back negative. Panorama’s last cruise ended March 14.

Last week the ship was anchored offshore. On March 31, it moved to Carnival’s Port of Long Beach berth, where it will remain until it switches place with another ship on Wednesday. Crew members are not allowed to go ashore during docking.

Some things are vastly different, others are much the same, said Lars Juel during an afternoon phone call.

Juel, Panorama’s hotel manager, serves with 1,400 crew members. At some point, Carnival may begin sending crew members home who are not essential for ships’ operations, but nothing has been finalized yet, said Gulliksen.

The big difference now for the crew, of course, is the 5,000 missing passengers. Said Juel, “Everybody would like to have the guests on board. It gives you energy. It keeps you occupied.”

In the absence of passengers, “the crew has been doing a lot of housekeeping, a lot of cleaning, a lot of sanitizing. And we still have to feed a lot of people. In many ways we have normal operations.”

For entertainment, the ship’s Wi-Fi has been juiced up so everyone has free access, movies are being shown, and some crew members are playing guitars and other music for entertainment.

“There’s a good atmosphere on board,” said Juel, a native of Oslo, who has worked for Carnival for 14 years. “Morale is high because we’re all going to make it together,” he said. “We’re all in the same boat, pardon the pun.”

“A very good sign is that empty hospital beds are becoming more and more prevalent. We deployed 418 Doctors, Nurses and Respiratory Therapists from the hospital ship Comfort and the Javits Convention Center to hospitals in NYC & State. Have more bed capacity than was needed. Good!” – President Donald Trump, 4/12/20

“The Constitution does not need to be rewritten; it needs to be reread.” – Ryan Fournier

“No true American says, ‘My rights may be exchanged for safety.’  That’s how cowards and communists think.” – Rogan O’Handley

“The same people who claim ‘stop and frisk’ is a gross violation of rights seem to think that governors arbitrarily ordering people to stay in their homes is just peachy.” – The Stoic

“Chuck, I went over to my step-daughter’s home to see her, our son-in-law and granddaughter this evening.  There were people walking on the golf cart paths, but no one golfing.  How is it you can walk the course but not play it?  Go figure that.  Biggest overreaction in history.” – Don Nelson