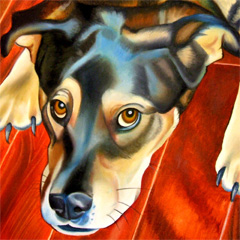 During the last big flood here in Las Vegas a week ago, my second daughter, 10-year-old Jenna, hopped in the car with me and we drove over to the Vegas Wash near the Desert Rose Golf Course to see the raging river flow heading for Lake Mead. While in the car, Jenna asked, “Dad, if you saw a hurt pigeon on the side of the road, would you stop and take care of it?”

First, as we adults know, wild pigeons are flying rats. Generally speaking, the fewer of them the better. In addition, I’m no veterinarian, so I’d have to try to pick up the pigeon and take him to an animal hospital where they might or might not work on him.

Plus, for all I know the pigeon just ate a bad burrito and was going to be fine after taking a good…well, you know.

So my answer was a rock-solid, “Maybe.”

A little dog running into the street.

My “Oh, sh*t!” came out at about the same time the car hit the dog.

The dog, still alive, was lying in the street. Without a second thought, I pulled up next to it, stopped in the middle of the street and put my emergency flashers on.

The dog – only about a year old, it looked – was still breathing; his eyes were open. He was a black-and-brown; an all-American “Heinz 57” mutt about the size of a beagle, with a red collar. After a brief hesitation worrying about whether the dog might bite me if I tried to pick him up, emotion trumped reason. The kids opened the passenger door, I placed him on the seat and off we went.

To where? I had no idea where the nearest animal hospital was. And then I remembered the Lied Animal Shelter.

The office wasn’t open yet when we pulled into the parking lot, but a worker seeing me carrying the clearly injured puppy in my arms went around the back and got a vet to come outside. They wrapped the puppy in a blanket and rushed him inside. Another worker handed me some paper towels to wipe the blood that had been coming out of the dog’s nose and mouth off my arm and shirt.

Nothing else we could do at that point, so off to roller skating.

I tried calling back later in the afternoon to see if the little dog had made it, but the recording at the shelter said someone wasn’t likely to get back to us until Monday. So the kids wanted to drive down and check in person. We did.

Unfortunately, we were told the dog didn’t make it. He had gone into seizures and was humanely put down.

And that was the only consolation you can give to your kids in that situation; that while we didn’t save the puppy, at least by picking him up and taking him to the shelter he didn’t suffer and die in the middle of the street.

Still, not much consolation. Moist eyes all around.

As we drove away, my sadness turned to anger. Not at the guy for hitting the dog; that was unavoidable. But for not have the decency to stop. And towards the irresponsible owner who let the poor little thing run loose in the neighborhood in the first place.

No, I don’t think this means we need any new laws. You can’t legislate compassion, no matter how hard you try.

On the other hand, at least I think I somewhat answered Jenna’s question about the pigeon through deed rather than action. Maybe that’ll hold off her own discovery that daddy’s not perfect for a little while longer!