Hamilton-Jefferson History is Repeating Itself over ObamaCare 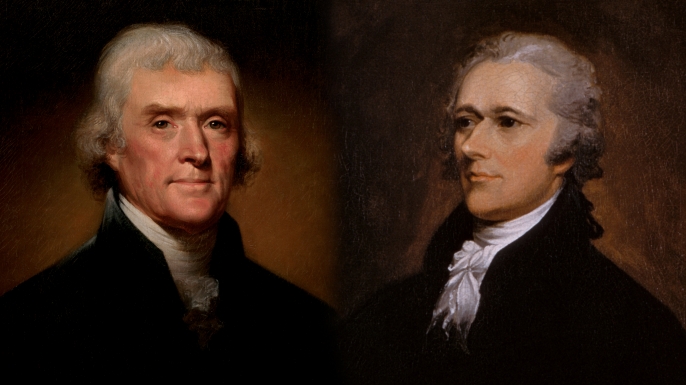 OK, let’s talk about the “failure” of Republicans in the Senate to pass an ObamaCare repeal-and-replace bill this month.  But first, a little history lesson.

After the Revolutionary War, the new states – former colonies – owed a boatload of debt for financing the war effort.

Then-Secretary of the Treasury Alexander Hamilton favored a robust central government and wanted the feds to assume the debts of the states.  As such, according to Hamilton biographer Ron Chernow, Hamilton proposed “a gigantic package of fiscal measures (related to “assumption”) that he wanted accepted all at once.”

Then-Secretary of State Thomas Jefferson abhorred the notion of a strong central government and opposed the funding proposal.  And on April 12, 1790 “the House voted down Hamilton’s assumption plan…and two weeks later voted to discontinue all debate on the issue.”

But there was another very controversial issue front-and-center at the time: Where the new national capital would be located.  Hamilton desperately, adamantly wanted it to be in New York close to all his banker buddies.  Jefferson, however, wanted it somewhere on the Potomac River – where Washington, DC is today.

You can see where this is going, right?

Yep.  In order to get his assumption plan passed, Hamilton gave up his burning desire for New York to be the new nation’s capital.

Why did he ultimately capitulate?  Because, Chernow writes, Hamilton clearly saw that the funding scheme “created an unshakeable foundation for federal power in America.”

The kind of federal power that today forces every single American to purchase health insurance or pay a fine for not having it on their tax return!

“Whoever considers the nature of our government with discernment will see that obstacles and delays will frequently stand in the way of the adoption of good measures, yet when once adopted, they are likely to be stable and permanent.  It will be far more difficult to UNDO than to DO.”

And this is exactly the political corner Republicans now find themselves backed into as it relates to ObamaCare.  As difficult as it was to do, it’s even more difficult to undo

Now, with our history lesson out of the way…

Senate Republicans DO own ObamaCare now – despite President Donald Trump’s declaration to the contrary.  Yes, Democrats approved ObamaCare without a single Republican vote.  But Republicans campaigned last year on “Elect us and we’ll repeal it.”

That check has now arrived.  The bill is due.  And the GOP owes it – even though it is, in fact, harder to undo ObamaCare than it was to do it.

The problem, of course, is that while we have a Republican majority in Congress we do NOT have a conservative majority.  As such, a handful of liberal and populist Republicans have been able to block the bill – including some who voted for repeal in 2015 when they knew President Obama would veto it.

There was no real political risk then.  No responsibility.  A coward’s way out.

That said, understand that the fat lady hasn’t sung on this yet, because Donald Trump has a completely different concept of “failure” than most members of Congress and the talking heads in the fake news media.

To a businessman and entrepreneur like Trump, failure just means you found something that doesn’t work.  Which means only that you need to try something else.  Failure only occurs if you quit.  And “quitting” is not an option in Donald Trump’s world.

So you can bet that behind closed doors in The Swamp, negotiations will continue and ObamaCare repeal is not dead.  It’s just in a coma – until it’s resurrected.

And while I know many conservatives are not exactly fans of Senate Majority Leader Mitch McConnell, don’t sell the man short.  He’s been at this game a long, long time.  And he’s perfectly capable of pulling a Harry Reid-like “Louisiana Purchase” or “Cornhusker Kickback” out of his hat to get the one, two, three or four votes he needs for ultimate passage.

Just like the assumption/capital compromise between Jefferson and Hamilton.

But make no mistake.  If McConnell doesn’t get this done before the 2018 elections, both the country and his GOP majority in the Senate are screwed.  This is the last chance to uproot ObamaCare before it’s set in stone – like Social Security.  And like Social Security, it will only grow bigger and get worse until it collapses under its own weight.

The bottom line is this: It ain’t over ‘til it’s over.  Trump won’t quit.  And McConnell still has cards to play.  The media can call what happened this month a “failure,” but it’s a nine inning game and we haven’t even hit the seventh-inning stretch.