Intractable and Rigid on Tax Pledge? Guilty as Charged! 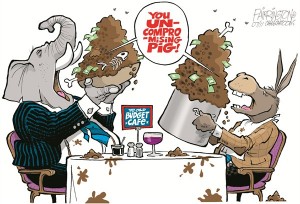 Mike Zahara, one of the more entertaining Democrat bloggers in Nevada, recently inked a post in which he took yours truly to task for being “intractable and rigid” in my support for the Taxpayer Protection Pledge – a pledge candidates make to their constituents promising that, if elected, they will vote against any and all efforts to increase taxes.

First, it’s not so much the tax increases, but the additional government spending the tax hikes allow that is objectionable. If we want to shrink government, and I do, we need to “starve the beast” – cut taxes, not increase them.

Secondly, as far as the conservative movement is concerned, the tax-hike issue is the glue that holds the various factions together – social conservatives, fiscal conservatives and libertarian-conservatives. It’s the one issue that universally unites the right.

Thirdly, the tax issue transcends party and ideology. Some would have you believe that Democrats and liberals want their taxes raised. Far from it. At best, they want somebody ELSE’S taxes raised, not their own.

Fourth, the Pledge works. Not one of the Nevada Pledge signers voted for the $620 million tax hike this last session. Every vote to raise taxes this year came from a legislator who refused to sign the Pledge.

And finally, let’s face it, any legislator who can’t get the tax issue right is gonna get a whole lot of other issues wrong as well. Voting for tax hikes is the political equivalent of the canary in the coal mine, especially when it comes to Republicans.

Mike also lamented that, in his opinion, I’ve relegated myself to a single issue. And in a way, that’s true, as well. But the single issue isn’t taxes; it’s limited government. As such, there’s a wide array of issues other than taxes that I strongly support, such as:

* Spending caps tied to population growth and inflation
* Parental choice; especially vouchers
* Allowing parents to vote to close poorly performing public schools
* Ending collective bargaining for government workers, or…
* Requiring all such union contracts be approved by a vote of the people
* Major pension and health care reform for public employees
* Protecting property rights against eminent domain abuse
* Requiring photo ID before voting
* Publishing the government’s entire checkbook online
* Allowing Nevadans to buy health insurance across state lines
* Making it easier to choose life by making it easier to adopt
* Even harsher penalties for anyone convicted of molesting a child

Well, I ran out of space. Suffice it to say the battle for limited government goes well beyond the tax issue, which I will continue the fight with a rigid and intractable single-minded purpose.