Is It Time for Nevada to Start Deporting…Californians? 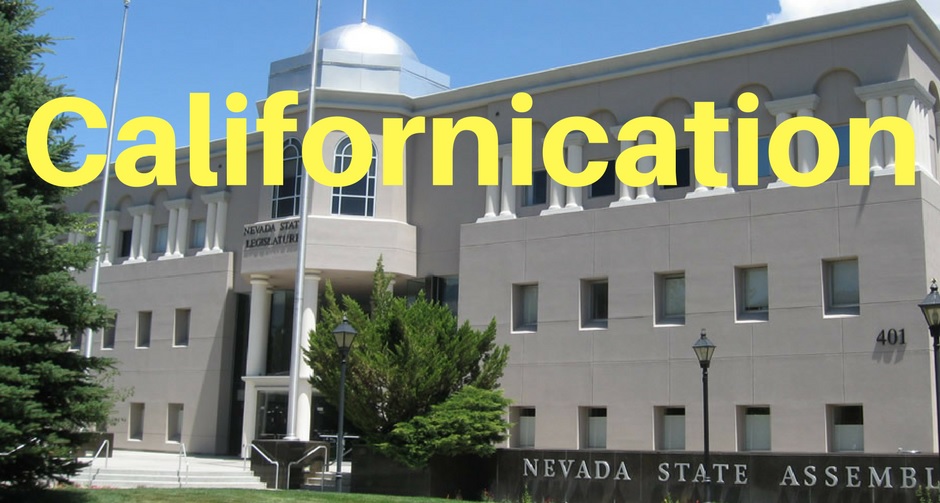 As the story goes, there once was an entrepreneur in California – over 20 years ago – who wanted to build a new research, testing and manufacturing facility for his nutritional supplements company.

Frustrated by the mountains of paperwork and bureaucratic red tape required to get permits in the Land of Fruits and Nuts, our hero ventured across the border to Nevada in search of a more business-friendly Promised Land.

His search led to the Nye County government center where he asked to see the building inspector, only to be told, “We don’t have anyone like that here.  We figure if you put it up and it falls down, that’s YOUR problem.”

Vunderbar!  And another freedom-loving California refugee loaded up his truck and moved to the greener pastures of the Silver State.

Unfortunately, too many other “bad” Californians have also moved here and brought with them all their old tax, spend and regulate habits.  They soiled their nest and now want to foul ours.

Maybe WE need a wall, too!

“I’m concerned we’re heading in the wrong direction,” Republican gubernatorial candidate Adam Laxalt told a group in Fernley recently. “A consistent theme I hear is we are turning into California. Does anyone want to turn into California?”

Not surprisingly, the resounding response was, “NO!”

In fact, it’s not unusual to see Nevadans, especially in northern Nevada, sporting t-shirts and bumper stickers reading, “I don’t care how you did it in California!”

And yet, apparently, our Legislature has not gotten the memo.  According to an Institute for Justice study, “Nevada is the second worst state in the nation for occupational licensing of lower-income occupations.”

For example, “Nevada is one of just four states that license interior designers,” requiring “four years of education and two years of experience (2,190 days total), $1,215 in fees, and one exam.”  Insane.

Or consider that Nevada mandates that bill collectors “must demonstrate 730 days (two years) of experience” while “EMTs need just 26 days (110 hours) of education.”  Beyond insane.

Here’s another example of how bad we’ve gotten:  According to a recent article in the Las Vegas Review-Journal a pet store owner in Henderson was fined $1,000 despite the fact that “There were no dogs that were injured, no dogs were distressed, and there were no allegations of cruelty.”

Then there was a “sting” operation in early March in which one guy was issued a citation “who allegedly solicited landscape work requiring a license” and another who was pinched “who allegedly offered painting and garage floor epoxying.”

A government big enough to be sticking its nose into interior designing, grass cutting and slapping paint on a garage floor is too big, period.  These are not “critical” or “essential” government services.  This is out-of-control bureaucratic mission creep.

And this is the #1 reason voters should support candidates who sign the Taxpayer Protection Pledge promising to “oppose and vote against any and all efforts to increase taxes.” Because the real problem with higher taxes isn’t so much the amount of additional money coming out of each of our pockets, but the amount of additional unnecessary government that cumulative money buys.

Which is also why it’s wrong-headed to say the government needs to do more with less.  What we really need is for the government to do LESS with less.  Unless, of course, you want to turn Nevada into California.  In which case, I have one simple request…