Join Us for a “Mass” Tax Pledge Signing Event with Grover Norquist! 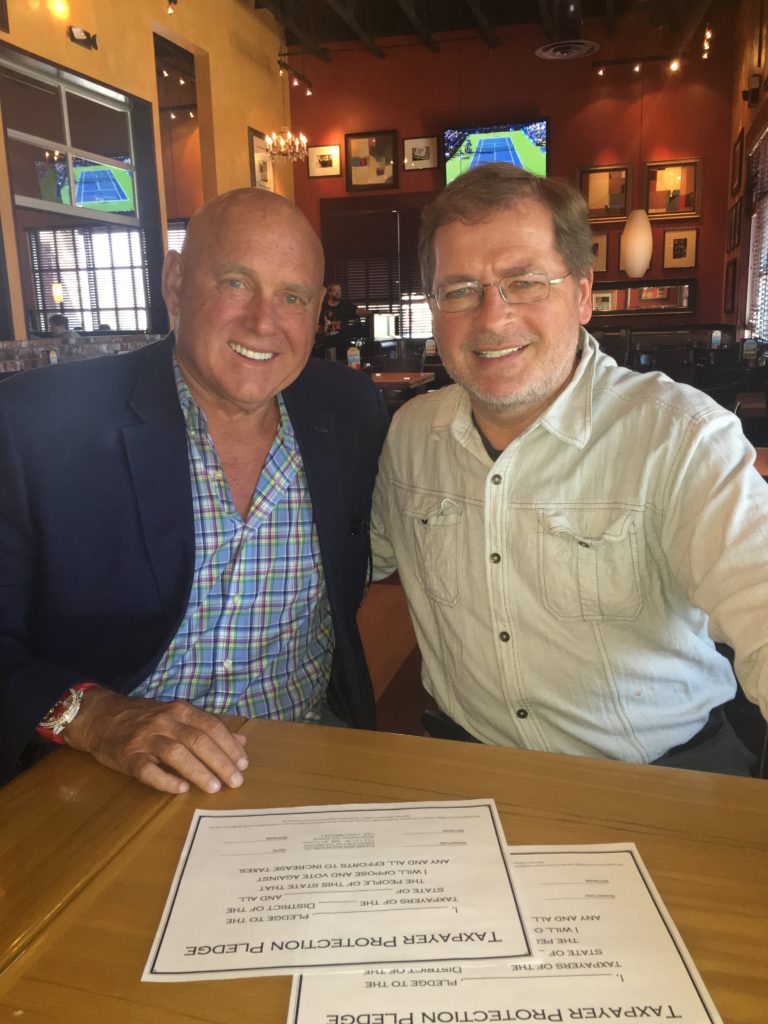 As pretty much everybody who reads Nevada News & Views and Muths’ Truths regularly knows, my friend and conservative ally Grover Norquist of Americans for Tax Reform is the “father” of the Taxpayer Protection Pledge whereby candidates running for office promise voters they will “oppose and vote against any and all efforts to increase taxes.”

Indeed, only two Nevada legislators who signed the Pledge voted for the largest tax hike in Nevada history in 2015: Sen. Michael Roberson and Assemblyman John Hambrick.  Every other Pledge signer voted “NO!”

Now, it’s one thing for me to press candidates – especially candidates portraying themselves as conservative Republicans – to sign the Pledge.  But when YOU ask every candidate who asks for your vote or to donate money to their campaign or volunteer your time, THAT has an even stronger effect.

So over the remainder of this election cycle, not only will I publish the names of candidates who have signed the Pledge, I’m going to let you know which candidates – particularly GOP candidates claiming to be against tax hikes – have NOT signed the Pledge, along with publicly available contact information so you can ask them yourself why they’re being so wishy-washy on the tax issue.

Just to get the ball rolling, let’s start with the U.S. Senate race.  Here’s a list of Republicans challenging Sen. Dean Heller – a Pledge signer – who have NOT signed the Pledge yet…

As you know, the problem isn’t so much that we need to elect MORE Republicans as it is to elect BETTER ones.

You might still vote for them in the general election as the lesser of two evils – but no endorsements, no donations and no volunteering.

Seriously, you guys…if you want to truly make a “yuge” difference and help elect BETTER Republicans, take a few seconds to call or email the non-Pledge signers I list here in Nevada News & Views over the next several weeks.  As Ronald Reagan once put it…

“When you can’t make them see the light, make them feel the heat.”

Now, for candidates who have not yet signed the Pledge and wish to do so, here’s an excellent opportunity to “git ‘er done” with Grover himself witnessing your signed commitment to protect Nevada taxpayers….

Grover will be in Pahrump on Friday, May 11th, for a campaign rally for Assembly District 36 GOP candidate Dennis Hof (disclaimer, he’s one of my clients), a Pledge signer who is running against one of only two remaining Assembly Republicans who voted for the largest tax hike in Nevada history in 2015 (the other is Hambrick), Assemblyman James “The Big Selloutski” Oscarson – who, of course, has refused to sign the Pledge.

And we’re going to have a “mass signing” ceremony in which any candidate wishing to sign the Pledge can do so with Grover as their official witness, along with a photo you can use on your campaign.

Heck, even if you’ve already signed the Pledge and want to sign a new one with Grover, that’s great. Come on out!

If you’re a candidate and you haven’t signed yet but intend to join us at the Hof rally and Pledge signing event shoot an email to chuck@chuckmuth.com and let me know you’ll be there and I’ll refrain from listing you as a NON-Pledge signer until after the event.  Fair enough?

If you want to learn more about the Pledge – including a list of the most common objections candidates spew for not signing it – or to download a copy of the Pledge (take it with you whenever you go to events where candidates might be around), click here

“Republicans who vote for tax increases are like rat heads in a Coke bottle – they ruin the brand.” – Grover Norquist