Reopen Nevada Protest Rallies Turn Up Heat up on Sisolak 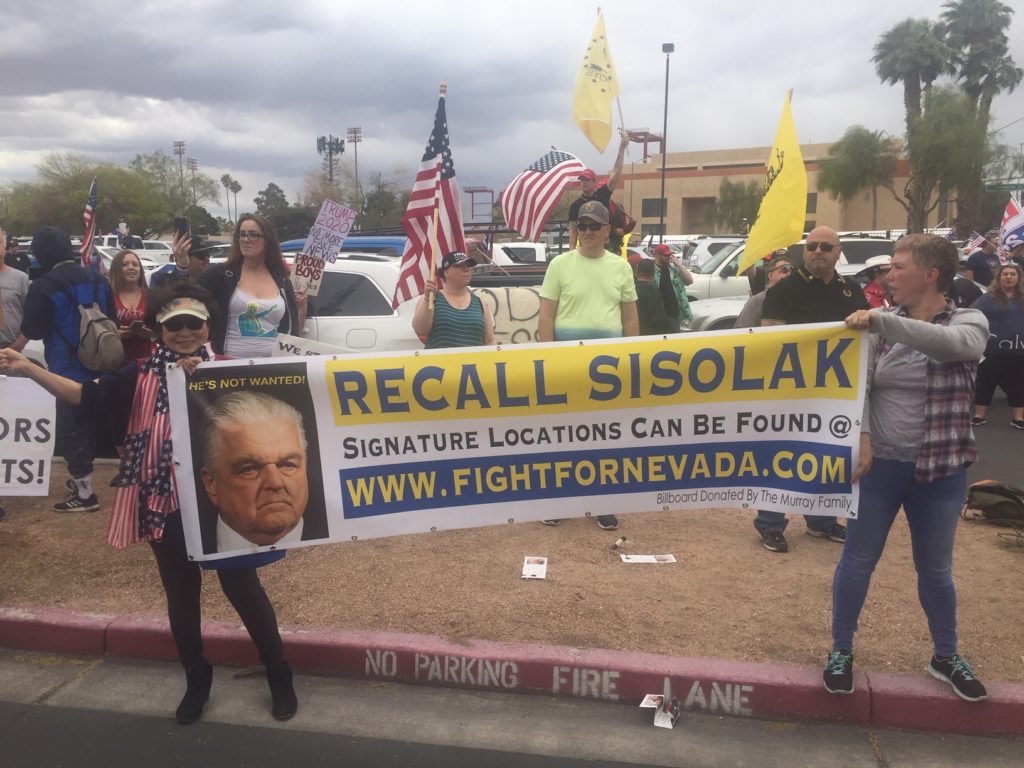 Many Nevadans appear to have had enough…and they ain’t gonna take it anymore.

Can’t speak for the one in Carson City, but the one in Vegas was huge.  Police reports estimated the crowd size at 500, but I’d guess it was at least double that.  Then again, I went to public school.

Naturally, Jon Ralston – the ever thin-skinned liberal grifter/blogger and king of fake news in Nevada – got his panties in a bunch.  He referred to the Nevadans who participated as “irresponsible loons” and referred to elected officials calling for the state to be re-opened “twits.”

Nevertheless, just hours after the pair of rallies ended, Gov. Sisolak weakly tweeted that he was “making considerations for our state-specific re-opening plan.”

As the old saying goes, if they won’t see the light, make them feel the heat!

The protests and rallies – growing in size and frequency – are clearly forcing the governor to FINALLY take seriously the immediate need to stop flattening our economy.

Here are a couple more photos from the Vegas rally… 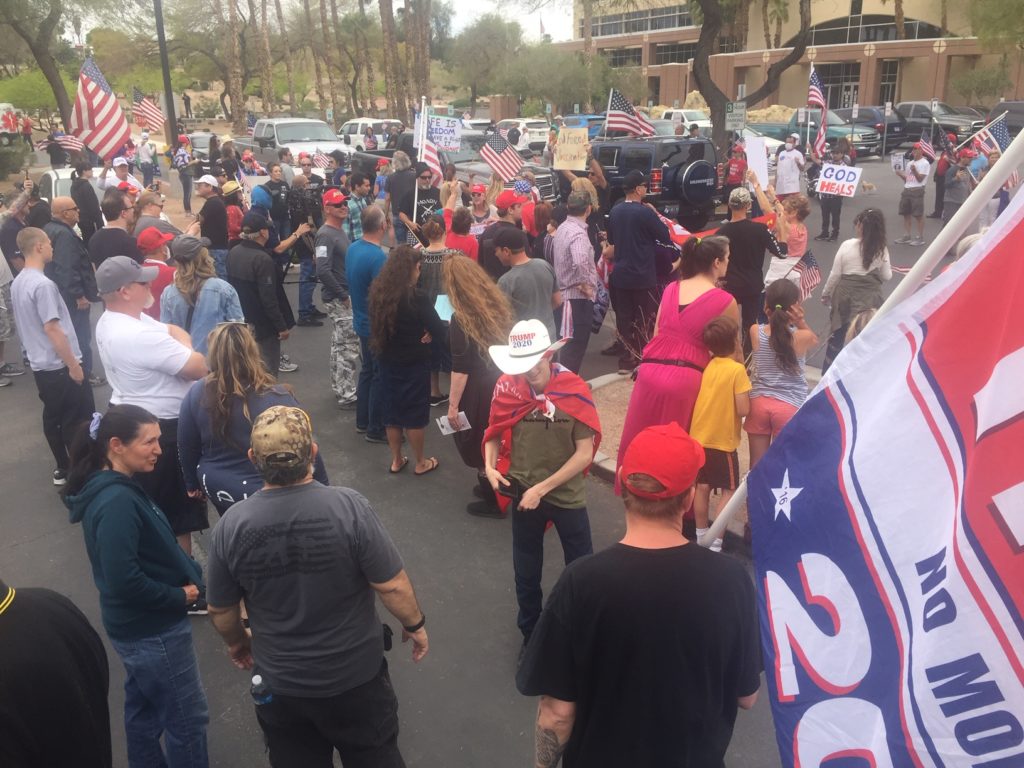 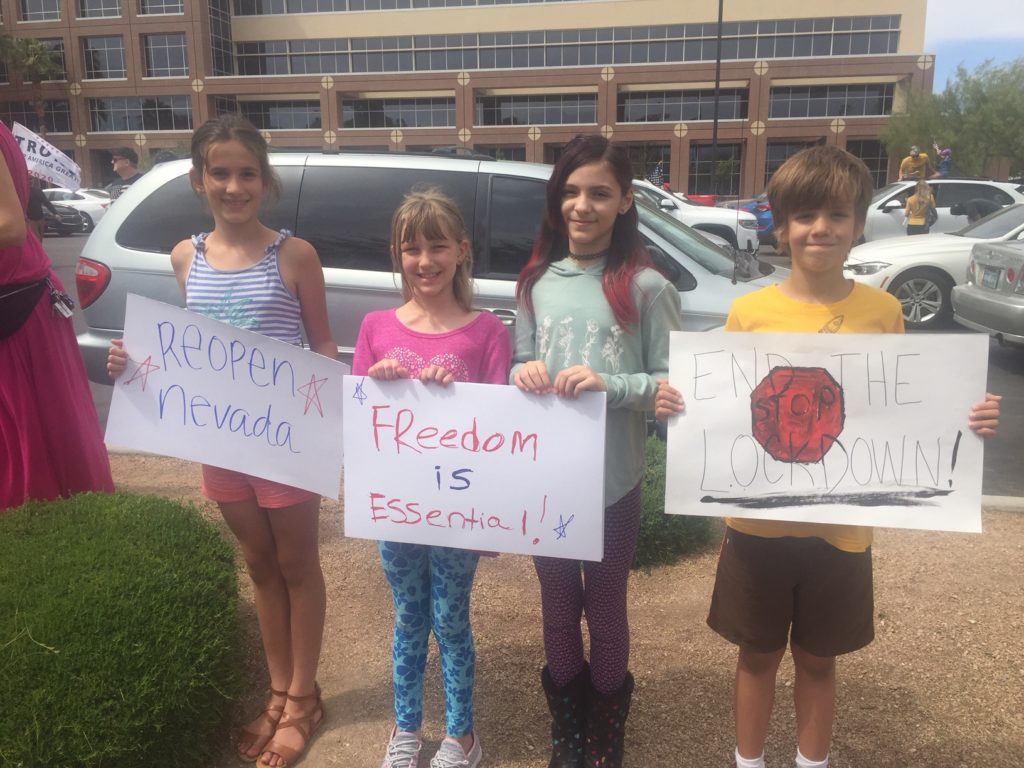 I tweeted that last photo with this question:

“How long before some nanny-stater reports this as child abuse?”

And yep, like clockwork, the “freedom deniers” came out of the woodwork.  But this reply from @AllOutBubblegum was priceless…

“After they die. Give it time jenius.”

* In case you missed it, Texas and Vermont will begin re-opening their states TOMORROW.

* Long before the Wuhan virus hit, President Trump was sounding the alarm about the need to bring American business back to our shores from overseas.  Turns out he was right.  Again.  And early on.  Now we’re supposed to turn the keys to the White House over to Joe “Beijing” Biden?  I don’t think so.

* When sports re-start they’ll likely be without fans in the stands.  Gonna be pretty boring to watch and listen to…unless…they do what they do for lame comedies and add a fake soundtrack of cheering fans when a goal is scored or someone hits a tater over the fence.

* A couple years ago movie theaters reinvented themselves by upgrading to a “luxury” version – more comfortable reclining seats, gourmet food, alcohol, etc.  In light of the Kung Flu, maybe it’s time to reinvent the drive-in theater experience, as well.

* Media hysteria over the Kung Flu has people afraid to pump their own gas for fear of touching the handles.  Sounds like now would be a good time for some stations to bring back full-serve gas pumps.  Be a great way for teens, especially, to make some tips.

* Dr. David A. DiOrio noted in a guest column today that approximately 533 people in Clark County died from the common flu during the 2017-18 flu season – yet no “knee-jerk” statewide shutdown order was issued.  The current estimate of Wu-Flu deaths in Clark County is 254.  What’s wrong with this picture?

* Why groups of ten and not nine?  Or eleven?  Where’s the data that set the magic number at 10?

* Gov. Sisolak said he flip-flopped and closed the golf courses after seeing pictures people sent to him of people playing golf.  Maybe we need to send him pictures of people online trying to file for unemployment.

* RJ columnist Victor Joecks today noted that it was Gov. Sisolak himself who proposed cutting the unemployment office’s staffing by 42 positions last year. But in a recent press conference, the governor blamed the Legislature – which, by the way, was completely controlled by the Democrats.  So, either way…unemployed Nevadans know who to blame for this nightmare.

* Why aren’t cuts to non-essential state and local governments programs and employees being made NOW?  The inevitable cuts are only going to be more painful the longer we wait.

“Trusting Biden, Schumer and Pelosi with the economy is like taking Ex-Lax and trusting a fart.” – Unknown