Seen & Heard on the #SisolakShutdown 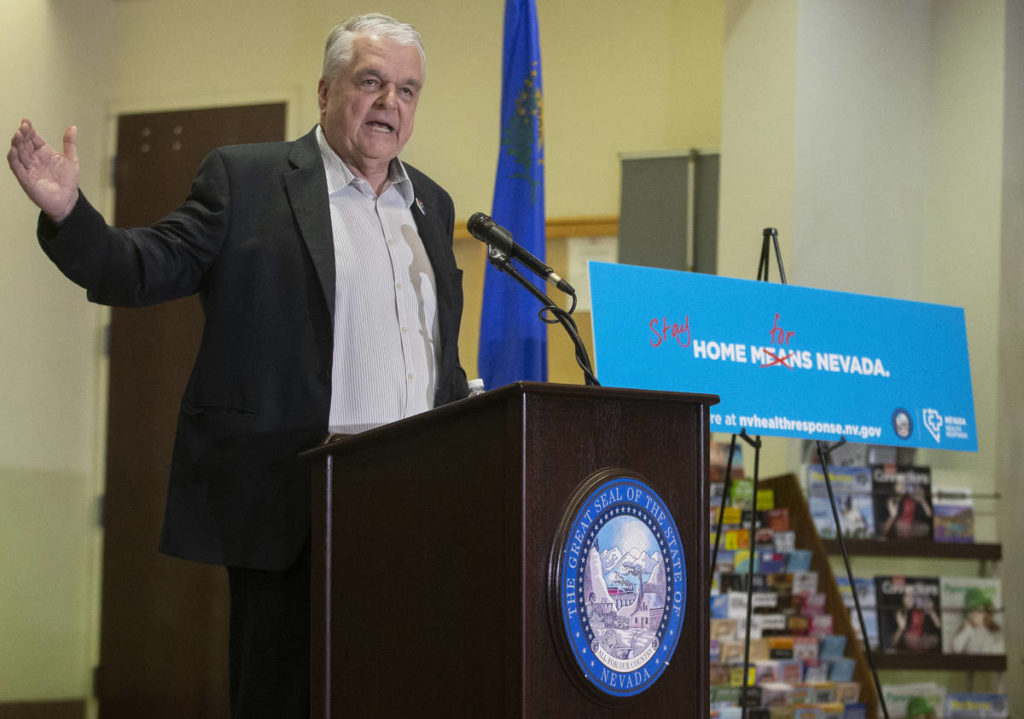 At the risk of brining partisanship into the crisis, got this from a friend this morning…

“The Chinese virus is trying to turn me into a Democrat.  It’s got me staying at home, not working, complaining about everything and waiting on my stimulus check.”

Reporter Riley Snyder reported today that selling cars has now been added to the list of “essential” businesses that are exempted from Nevada Gov. Steve Sisolak’s statewide shutdown order.

Riley reports that the governor’s office confirmed “that car dealerships can continue operating during the business shutdown, even though they are not explicitly mentioned in emergency regulations outlining the types of businesses allowed to continue operations” as long as they use “aggressive social distancing protocols for patrons.”

This is pure insanity.

Why can a car dealership sell cars as long they follow social distancing protocols but not other retail sales stores like Best Buy and Game Stop?

Look, I know a number of you support Gov. Sisolak’s statewide shutdown order and think it’s necessary to slow the spread of the Wuhan virus.  And considering the hysteria over this that’s been whipped up by the media (see next item), it’s understandable to a certain extent.

But the IMPLEMENTATION of this – with all the nonsensical exceptions to the rule which have enabled the governor to single-handedly pick winners and losers – is a fuster-cluck of metaphysical proportions.

If car dealers can remain open by simply following social distancing and other safety precautions, EVERY retail business should have the same right.  Either close everybody down or open everybody up.

And while we’re on the subject of the irrational insanity of the implementation of the Sisolak Shutdown, consider this…

Schools have been shut…but day care centers have remained open.

Outdoor parks have been closed…but bus transportation has continued.

All the Doom-and-Gloom That’s Fit to Print

And that doesn’t count all the individual tweets by Ralston himself and Codependent reporters.

We have nothing to sell but fear itself!  (Don’t forget to donate.)

OK, Let’s Talk about the Numbers…

Yes, the number of positive test results in Nevada continues to increase daily.  But that has at least as much do to with the fact that more testing is being done and is not necessarily an indication that the virus is spreading out-of-control.  As Mark Dice notes…

“We’re testing a lot more people since tens of thousands with mild to no symptoms are rushing to the hospital because they’re coming down with a case of paranoia from watching too much CNN.”

Or reading the Nevada Codependent.

Now consider the fact that pretty much only people exhibiting signs that they are sick are being tested.  The tests – with the exception, of course, of celebrities and government officials – aren’t being administered to healthy people who show no signs of the infection.

Now, of the suspected SICK people who are being tested, according to figures posted by the Department of Health and Human Services on Thursday, 6,696 SICK people have now been tested for the Wuhan virus.

We’re killing our economy, driving businesses into bankruptcy and sending over 100,000 Nevadans into the unemployment line over THAT?

A Tale of Two Governors

While Nevada’s Gov. Steve Sisolak, has irrationally over-reacted and sentenced the vast majority of otherwise law-abiding Nevadans to statewide house arrest – treating rural counties the same as Las Vegas and Reno – to deal with the Wu-Flu scare, Florida’s Gov. Ron DeSantis, has taken a far more reasoned and rational approach.

“Mr. DeSantis has stopped short of declaring a statewide lockdown or closing all non-essential businesses,” noted the Wall Street Journal on Thursday.  “Instead local governments have flexibility, and major cities like Miami and Orlando are imposing more draconian policies like those in effect in New York and California.  In less densely populated Florida areas there are fewer restrictions.”

The risks in Las Vegas and Reno aren’t the same risks in Ely or Elko.  Not saying there’s ZERO risk.  Just saying the risk factors are different and should be treated differently.  A one-size-fits all statewide shutdown ignores that reality.

On the other hand, Gov. Sisolak’s ever-growing list of exceptions to his mandatory statewide shutdown makes no sense whatsoever – such as shutting down parks and playgrounds but allowing day care centers to remain open.

But make no mistake.  The vast majority of the public – influenced by the hyper-panic news reports by irresponsible journalists – is right now on the side of the authoritarians.

So it would be EASIER for elected officials such as President Trump and Gov. DeSantis to just give in and go with the flow.

Once the country finally starts opening up again, I’ll be looking for an airline that announces the following “social distancing” seating arrangements…

In row one on the left side of the plane, only the window and aisle seat will be assigned.

In row one on the right side of the plane, only the center seat will be assigned.

Then reverse it for row two.  And so, and so one, and so on.

I’m pretty sure folks would pay extra for THAT.

* The ACLU is calling on Gov. Sisolak to release prisoners and cut back on arrests.  What could go wrong?

* In another of his Theater of the Absurd Facebook performances on Thursday, Gov. Sisolak said he still might impose even tougher enforcement measures – hello, National Guard? – and threatened to extend the Sisolak Shutdown beyond 30 days.  Be afraid.  Be very, very afraid.

* With the state and counties all facing an inescapable financial crisis RIGHT NOW, what are they doing to cut costs and expenses – non-essential programs, services and workers – RIGHT NOW?  Why are they waiting for things to get worse before taking action?

Need to keep our sense of humor in these trying times.  Hope this helps (hat tip, Don Miller)…

“It is interesting that Sweden – the one European country that did not want to shut its borders, did not close schools, and has not banned gatherings of fewer than 500 people – so far seems to be containing the spread better than other countries have.” – Johan Norberg, Reason magazine

“Why can’t you eat in the restaurant but it’s okay to get take out? In restaurants you can sit 6 feet apart, but you’re getting the same food. Who knows if the workers are always wearing fresh gloves? Who knows if they sneezed or coughed while preparing the food?” – Simi Zuckerman