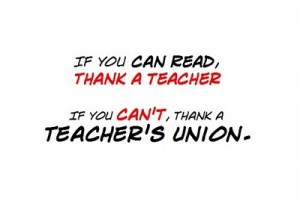 I think the mainstream media has been missing a huge aspect of the Nevada budget war as it relates to teachers. There seems to be an underlying unasked question as to why the general public has seemingly turned against formerly beloved teachers who in the past could do no wrong. What’s changed? Why isn’t the public on their side over education budget cuts?

Answer: The politics of the teachers union.

Nevada, as well as the country, is center-right. The teachers union is hard-left…and has been for many years. Indeed, over the weekend the National Education Association endorsed Barack Obama for president with 72 percent of the vote. That’s close to the winning margins Saddam Hussein used to get!

It’s not that people don’t like individual teachers; it’s that they don’t like the liberal political agenda of the teachers union. And while a distinction has been made between the two in the past, not so any longer. This hard-left organization has blown the affinity of the center-right population as a whole. As such, when teachers start complaining about education budget cuts, a lot of center-right folks are now responding with: “We don’t care.”

In addition, they myth of underpaid teachers, especially in this economy, is finally being exposed.

The Las Vegas Sun recently featured a story about two full-time teachers whining about how they’re being mistreated in Nevada, claiming we don’t “value education.” As such, they’re threatening to move out-of-state for greener pastures despite hauling in some $114,000 a year combined, plus lucrative health and retirement benefits….oh, and summers off.

Hey, don’t let the door hit you in the arse on your way out!