The Law of Cell Phone Insanity 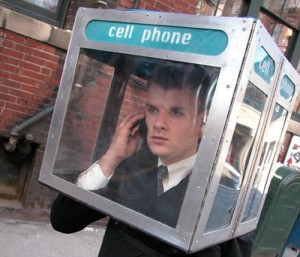 On October 1 a new law banning the use of cell phones and other electronic devices while driving took effect in Nevada. As such, the Las Vegas Sun helpfully provided a primer explaining the new law which explains everything…except why anyone voted for it.

State Sen. Shirley Breeden, not exactly the deepest thinker in the Legislature, explained that the purpose of her bill, SB140, was to force drivers to “keep your hands on the wheel.” As such, “if the device needs to be in your hand as part of any function, it falls under the law and is not allowed.”

Also, according to the story, if you’re listening to music on your cell phone and try to skip a song, Breeden says you’re in criminal violation of the law. However, a Metro spokesman says if you’re just “reaching over to turn the phone on and off,” that’s OK.

Can you text while sitting still at a traffic light? Breeden says no. “It’s taking your eyes off the road.” But, um, you’re not moving…so what?

What if the cop can’t see you texting because you’re holding your phone down low out of sight? Tricky area for law enforcement; however, “the glow of a display on your face at night…would provide probable cause.” Then, after pulling you over, if the officer sees “the device in your lap, officers can make the determination you were using it while driving.”

Are you kidding me?

Judge: “Officer, why did you pull this motorist over?” Officer: “His face was glowing?” Judge: “Did you witness the motorist texting while driving?” Officer: “No, your honor, but after I pulled him over I had to ask if that was a cell phone in his lap or if he was just glad to see me.”

Worse, according to the story “Officers are told to assume you’re using your phone if you’re holding it. So being absent-minded could cost you.”

In other words, just holding a cell phone in your hands could get you pulled over even if you’re not doing anything with it. Why? Because it’s in your hands. Remember, the goal of law according to Sen. Breeden is to “keep your hands on the wheel.”

So you can’t drive and merely hold a cell-phone in your hands, but it’s OK to drive while drinking a Coke or eating a cheeseburger? How do you rationalize that?

About the only thing going for motorists in this ridiculous, feel-good farce is the fact that police officers reportedly can’t grab your phone after pulling you over and check it to see if you were, in fact, texting of talking while driving. Those pesky constitutional rights and all.

Look, do some people drive dangerously while talking on their cell phones or texting? Oh, heck, yeah. But is passing a convoluted “feel-good” bill which is almost impossible to enforce by police officers who really should have bigger fish to fry the best way to address the problem? Heck, no.

Instead of this nanny-state, next-to-impossible-to-enforce law, what’s probably called for here is a non-profit organization called “Mothers Against Texting & Driving” to launch a high-profile public education campaign to persuade people to change their behavior.

But the real problem here is that this bill is a perfect example of “camel’s nose” legislation. Today the government nannies are coming for your cell phone; tomorrow it’ll be your Big Mac. Ye be warned.

UPDATE: In order to comply with the new law, the Las Vegas Review-Journal is reporting that people are pulling over to the side of roads and highways to take calls, which law enforcement says is at least as dangerous as driving and taking the call.

Talk about the law of unintended consequences.