The Power of the Pledge compels you!

Las Vegas Valley Tea Party President Mary Rooney was kind enough to invite me to speak at last night’s meeting at the Boulevard Bar & Grill in Las Vegas to give a briefing on the status of our tax repeal referendum.   I also discussed in detail the Taxpayer Protection Pledge… 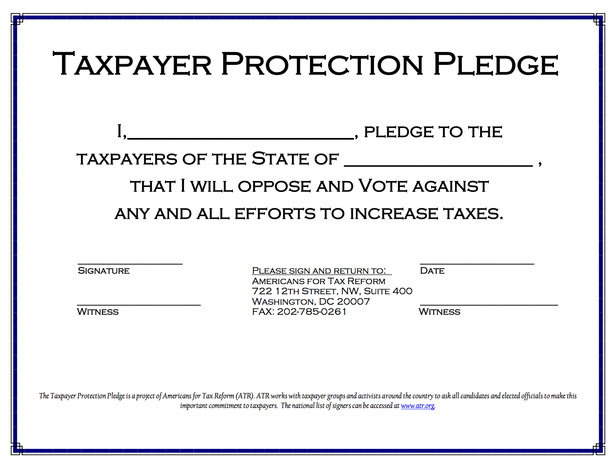 90% of the state legislators who signed the Pledge as candidates

The only exceptions were RINO Senate Majority Leader Michael Roberson and RINO Assembly Speaker John Hambrick – both of whom sold out and broke their word in return for their powerful leadership positions.

That said, the Pledge is nevertheless the political equivalent of the Good Housekeeping Seal of Approval.  It may not be full-proof; however, conservatives can go into the voting booth and cast their ballot for a Pledge signer with a high degree of confidence that the candidate will actually keep their word.

On the other hand, voting for a non-Pledge signer is like hiring a heart surgeon off Craig’s List.

Dooling noted that while all the wishy-washy Republicans in the Legislature were being harassed and harangued unmercifully to vote for the largest tax hike in Nevada history, they pretty much left her alone knowing she was not going to break her written Pledge to the voters of Nevada.

This is a benefit I first heard from former Assemblyman Chad Christensen back during the 2003 tax hike fight.

Towards the end of that session Chad grabbed me in the hall of the Legislature and admitted he wished he had signed the Pledge.

Because the lobbyists and agents for then-Gov. Kenny Guinn were arm-twisting, browbeating and threatening Republicans in concerted efforts to get them to vote for Guinn’s monstrous tax hike. Chad said the pressure was unbelievable and darned near unbearable.

But the lobbyists pretty much left the Pledge signers alone, recognizing it was a waste of their time to try to get a Pledge signer to break their written word.

Which is also why those lobbyists threaten and often refuse to donate to the campaigns of candidates who sign the Pledge to this day; because they know their arm-twisting tactics during the session won’t work on those who do.

The fact is the Pledge is the single most reliable political weather vane for how a candidate will actually vote if elected, not only on tax and budget issues but a host of other issues important to conservatives.

Because if they can’t get the tax hike issue “right,” they’re far more likely to get other issues wrong, as well.

I’ve been an advocate of the Pledge for two decades now.  But, after the debacle and sell-out by non-Pledge signers in the Nevada Legislature during the 2015 legislative session, it’s now a litmus test…

Unless a candidate signs the Pledge or can give me a valid reason for not signing – and good luck with that; “my-word-is-my-bond” doesn’t cut it – I will not openly support them, help them, promote them, volunteer for them, donate to their campaigns or publish any of their newsletters, columns, blog posts or event notices.

And I hope you’ll do the same.

Because as we learned the hard way once again this year, it’s not enough to simply elect more Republicans; conservatives need to elect better ones, as well.

And it’s one thing for me to continue urging people to sign the Pledge, but it’d be far more powerful if every conservative voter, donor and volunteer told candidates the same thing.

Indeed, it’s the only way to combat the threats the special interest lobbyists use to persuade people not to sign the Pledge.

Signing the Pledge needs to be as much of a litmus test for all of us as not signing it is for all the liberals, RINOs, lobbyists and tax-hikers.

Anyway, after I wrapped up my remarks last night, four Republican candidates who are challenging tax-hiking incumbent RINOs stepped forward and proudly signed the Taxpayer Protection Pledge in front of that room full of witnesses!

Two other GOP candidates have announced their candidacies for this seat, but neither has signed the Tax Pledge yet.  As such, I won’t be mentioning them here.

Take the Pledge or take a hike.