Nevada State Treasurer Dan Schwatz’ announcement this week of his quixotic candidacy for governor landed with all the excitement and enthusiasm of a dead cat bounce.

The moderate Republican, with little to no detectable base of support, made his “big” announcement at the Republican Men’s Club luncheon in Las Vegas on Tuesday – clearly because a stand-alone announcement event by the campaign itself would have attracted as many people as a malaria symposium giving away free samples.

Some observations of the truly embarrassing roll-out…

We’ll start with my table before the luncheon began.

Despite the announcement being marketed aggressively to members prior to the event, one lady asked, “Is somebody announcing his campaign today?”  I responded, “Dan Schwartz.”  She replied, “Who?”  I countered, “Exactly.”

And it went downhill from there.

A multi-step staging area was constructed behind the podium for people to stand on to provide a video optic for the news cameras which supposedly would demonstrate widespread grassroots support for Schwartz.  It didn’t quite work out that way. 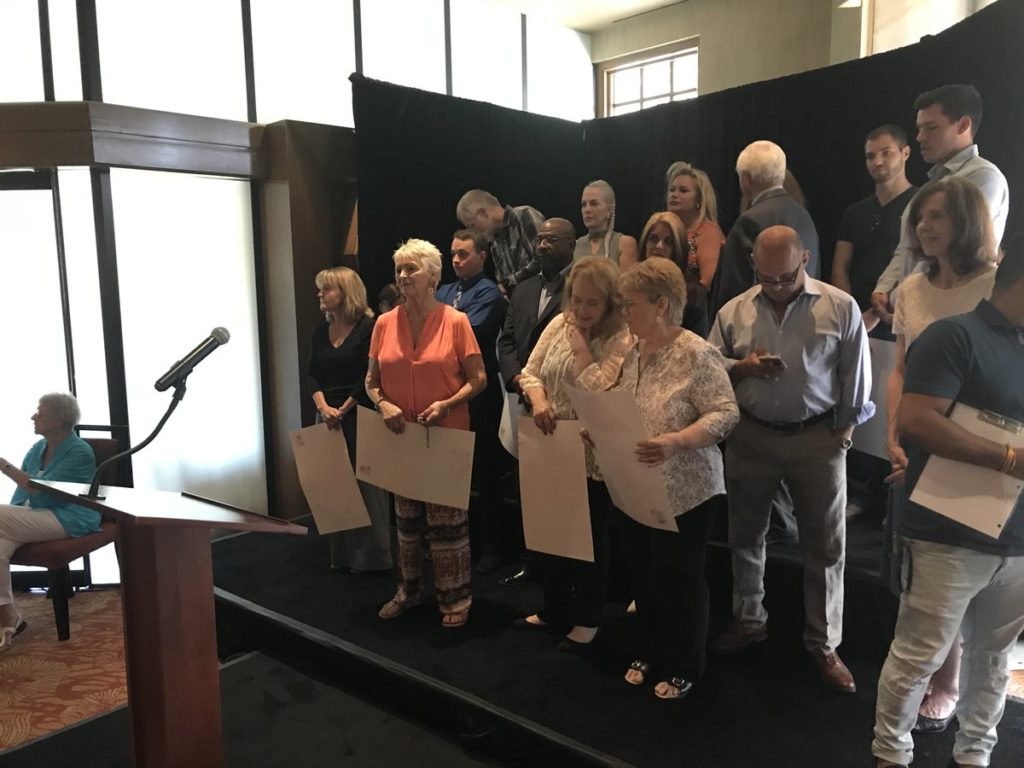 I spoke to one woman who was up there during the dog-and-pony show after it was over and she told me one of the event organizers had asked her to stand there even though she had no idea why.  She said she wasn’t a Schwartz supporter but was asked to just “fill up space.”

Hilariously, another of the handful of folks lined up behind the nascent candidate was also another Republican candidate for governor!  Somehow I don’t think he was a Schwartz supporter either.

On the other hand, there was one prominent figure on the stage who WAS a Schwartz supporter – but somehow I don’t think his presence was exactly helpful for a candidate seeking the REPUBLICAN nomination for governor…

I wonder which political svengali thought THAT was a great idea?  I could write the campaign mailer in my sleep.

Then came the candidate’s speech and formal announcement…

Schwartz started off declaring that he wasn’t a “politician” – which is about one of the lamest, silliest and most overused political declarations on the planet, delivered by a politician who is now running for his FOURTH political office.

He then proceeded to deliver a typically horrid political speech that was all about…Dan Schwartz.  Oy.

Now, bearing in mind the late, great Margaret Thatcher, who once famously said that “being powerful is like being a lady; if you have to tell people you are, you aren’t,” the moderate Republican went on to declare that he was a “conservative.”

And it was really weird.

Schwartz defined the meaning of being a conservative in a manner never before described in the history of our republic.

He first claimed that George Washington was the first Republican, even though there were no political parties when Washington was president and Washington himself loathed the very notion of such “factions.”  You could look it up.

He then when on to define conservatism as political honesty, invoking the mythical story about Washington and the cherry tree which was invented out of whole cloth by one of Washington’s early biographers.  Indeed, the untrue cherry tree story may have been the very first American example of “fake news.”

Schwartz proceeded to brag to the assembled grassroots Republicans about his wealth, advising that it was “no secret” that he was in the “39 percent tax bracket.”  Then went on to patronize the fairer sex in the audience by declaring he wanted to put a woman on his ticket.

In light of his record, maybe liberal Congresswoman Dina Titus would be interested!  I’m sure Mr. Collins would be down with that.

As the Man Who Would Be Governor droned on, watching the paint dry on a fence outside the dining room window became awfully attractive.

When he mercifully brought his remarks to a close, Schwartz received polite applause.  But other than ONE WOMAN – who desperately but futilely used hand gestures trying to coax other attendees to join her – no one stood.  How embarrassing.

Attendees were provided slips of paper on their tables to write down questions for the candidate which would be asked by a moderator who circulated among the tables collecting them.  As most of the early questions were pretty much “soft balls,” I wrote one down and handed to the lady…

Of course, I already knew the answer.  He told Grover Norquist, Father of the Pledge, that he would not sign it a couple weeks ago.  But most of the GOP folks there at the luncheon didn’t.

And then it happened…

A staffer from the Schwartz campaign was standing at the back of the room.  Someone told me they saw him actually writing questions for the moderator to ask.  Talk about a staged set-up!

I watched as the moderator worked her way back to the staffer, hand him my written question, to which he shook his head “no.”  And lo and behold, this very legitimate question relating to the issue of tax hikes – especially in light of the current Nevada governor shoving the largest tax hike in state history down our throats – never got asked.

Glad he cleared that up.

So here’s the deal…

And that’s just the tip of the iceberg.

There is absolutely, positively no doubt whatsoever that Laxalt – as the late, great American conservative William F. Buckley put it – is the most conservative candidate in all of Nevada who can win.

Schwartz’ foolish, self-serving candidacy will accomplish nothing but forcing Laxalt to spend money in the GOP primary unnecessarily and “softening him up” for the Democrats in the general election.

In a story published on the same day by the Las Vegas Review-Journal, we learned that “a conservative super PAC had launched a campaign to sink Schwartz’s chances.”

According to the RJ story, “the American Integrity Project launched a statewide digital and radio ad campaign attacking Schwartz over his ‘alternative budget’” that Schwartz presented in 2015 which would have retained some $500 million worth of “temporary” “sunset” tax hikes as well as “an illegal airport passenger tax and a politically dubious 25-cent-per-meal fee.”

The PAC also released a poll conducted in early August by a very reliable and credible polling firm, WPA Intelligence, that showed Laxalt leading Schwartz 64-5 percent with 31 percent undecided. That means that if Schwartz was somehow able to get every single undecided voter, he’d still lose to Laxalt by an almost 2-1 margin!

“As the polling shows,” noted Brian Baker, senior adviser to PAC, “Dan Schwartz’s self-funded ego trip is nothing more than a nuisance and is hurtful to the eventual GOP nominee for governor.”

The PAC also launched a petition website, www.StopSchwartz.com, which outlines just how far out of step Schwartz is with Nevada conservatives.

It’d be nice to think that maybe Mr. Schwartz would see the folly and potentially harmful consequences of his candidacy for Nevada’s conservatives, Republicans, taxpayers and citizens and pull the plug on this senseless campaign.