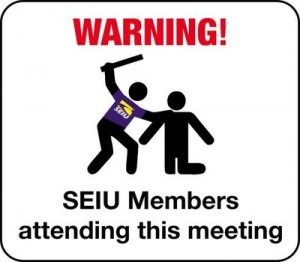 If there is any entity out there more adept at killing the proverbial goose that lays the golden eggs than organized labor, I don’t know what it is. Indeed, right here in Clark County public employee unions have somehow successfully turned traditionally lionized public servants into public enemies.

From overtime abuse by Clark County firefighters to intransigence by North Las Vegas cops which might result in the closure of two neighborhood recreation centers, government employees collectively have bargained themselves into what may be permanent black eyes.

Despite the ongoing economic carnage being visited upon southern Nevada, the SEIU has been dragging its feet in negotiations with the county, which needs to close an estimated $42 million budget hole. And according to reporter Joe Schoenmann, if the SEIU would simply agree to freeze merit and longevity pay for the remainder of this fiscal year, which ends next June, the county could save some $6 million.

That’s not a pay cut, by the way. That’s simply a freeze on pay increases.

To which the SEIU has essentially said, “Up yours.” The union apparently believes that if it can drag out negotiations long enough, the economy will improve and they won’t have to make any concessions whatsoever. Which could leave economically-strapped taxpayers picking up an even larger, more painful tab down the road.

Of course, the SEIU is denying they’re slow-walking the process – a claim as believable as a Paris Hilton claim of chastity or a Charlie Sheen claim of sobriety. But there are other aspects of this brouhaha which ought to get the public’s dander up, as well.

For instance: If the county says the union is stonewalling negotiations and the union says it’s not, who are taxpayers to believe since the negotiations are closed to the public? Not to union members, by the way. Just to the average citizen who will have to cough up the dough to fund whatever the negotiators agree to.

Even more egregious, however, is the fact that once a final agreement is hammered out, no matter how long it takes, each and every SEIU member will be given an opportunity to vote on accepting the deal or rejecting it. Alas, no such opportunity to give a similar thumbs-up or thumbs-down will be afforded to those who will pay (through the nose) for it.

SEIU spinmeister Nick Di Archangel claims the main thing slowing down negotiations is that “all 40 articles of the contract are being reviewed and it takes time to keep members abreast of changes.”

Hello? Who is keeping the members of the public abreast of changes? Why is the process being slowed down to tell union members of changes in contract negotiations without informing the public of such changes, too? And while we’re on this inquiring-citizens-wanna-know train of thought, noodle this:

Schoenmann reports that Clark County Commissioner Tom Collins thinks the county “should stop hitting employees in their pocketbooks and look for savings from places other than wages. He suggested, as an example, decreasing paid sick days from 12 a year to eight or eliminating one paid holiday a year.”

Here’s what I think:

I think the SEIU members should give back the pay hikes they shouldn’t have gotten over the last three years in the middle of this recession in the first place AND an indefinite freeze on merit pay and longevity pay AND a reduction in paid sick days and holidays commensurate with the average number of paid sick days and holidays workers in the private sector receive.

Oh, and if a government job is non-essential, whether we can “afford” it or not: Layoff. Enough coddling and pussy-footing around.