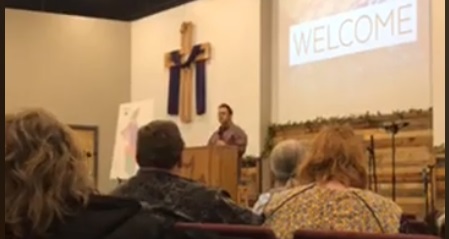 (Chuck Muth) – Jason Guinasso is the individual who spearheaded efforts to ban legal brothels in Lyon and Nye counties last year and served as the group’s legal adviser.

He also formed and registered a political action committee – End Trafficking and Prostitution (ETAP PAC) – with the Secretary of State for that purpose.

And in case you missed my report over the weekend, Mr. Guinasso and ETAP PAC hid from the public the fact that Lyon County Sheriff Al McNeil secretly gave a $500 donation to the PAC on April 13, 2018 and another $999 donation on August 30, 2018.

On Saturday, April 14, 2018 Mr. Guinasso held a private political rally at the Calvary Chapel church in Dayton Valley for the purpose of recruiting volunteers to sign and/or gather signatures for a ballot initiative to close the four legal brothels in Lyon County.

And a video of that presentation – including a bombshell revelation at the end – surfaced over the weekend after my initial report was published.

“The real goal here is to get 320 volunteers to collect 25 signatures each” for the initiative, Mr. Guinasso told the gathered attendees from the pulpit of the church.

He went on to describe the process and procedures for qualifying his brothel ban for the November ballot, adding that what he really hoped for was that the Lyon County Commission would put it on the ballot so he wouldn’t have to.

And then 14 minutes into Mr. Guinasso’s recruitment rally, something strange happened – all caught on tape.

Sheriff McNeil started off by maintaining that he was speaking as a “private citizen” – even though he was introduced as “Sheriff McNeil” and went on to speak at length about his role as sheriff as it related to brothel enforcement and regulation.

“The counties of Douglas, Carson City and Lincoln counties all said no; we do not want brothels in our county,” the sheriff told the attendees.  “And I believe it’s time that Lyon County join the rest of our neighboring counties with a similar approach.”

Not exactly an objective, unbiased statement of facts.  The sheriff clearly and unambiguously let everyone know he had picked a side on this issue.

Sheriff McNeil then went on to explain how much revenue the brothels generate for Lyon County – $348,000 was his figure – but assured the gathering that if this “dying business” went away, “not a single county employee is going to lose their job (and) not a single service we currently provide is going to go away.”

That’s a statement of by an official government employee, not the opinion of a “private citizen.”

Sheriff McNeil went on to explain that brothel taxes and fees are used to purchase the county’s vehicles, including his own – which, he lamented, was a “2005 Ford Crown Victoria with 140,000 miles on it.”

“I’m not asking for a new car next year, nor am I asking for one anytime soon,” Sheriff McNeil continued – again speaking as the sheriff, not a “private citizen.”

He then went on to explain that the county has insurance against lawsuits; arguing that any legal actions that might arise as a result of passing the initiative to close the brothels would only cost the county a $25,000 deductible.

Not the sort of information generally provided by a “private citizen,” as opposed to a government official.

“I don’t have enough staff to deal with the traffic speeders let alone get staff up there to do the mandated-by-statute checks on brothels,” Sheriff McNeil continued as sheriff, speaking about the sheriff’s office.  “I don’t have the staff to do it.”

Again, these anti-brothel comments weren’t from a “private citizen.”  They were directly related to Sheriff McNeil’s position as an elected government official.

“Whether the brothels are here today or gone tomorrow or still here tomorrow is not going to impact whether we will see increases in illegal street prostitution,” the sheriff continued, detailing existing law enforcement efforts by his office.

He then noted that he had earlier spoken with Carson City Sheriff Ken Furlong, and said that Sheriff Furlong said that he didn’t expect any increase in illegal prostitution in Carson City if the legal brothels in Lyon County were shut down.

Again, remarks clearly from the standpoint of his official position as county sheriff, not as a “private citizen.”

“I have a public position as the sheriff,” Sheriff McNeil then stated; “that it is bad public policy to licensure anyone for the sexual exploitation of vulnerable women for money and the government getting a cut of that money.”

This, of course, is the most intellectually dishonest argument put forth by brothel opponents.

The fact is all of the women working in Nevada’s legal brothels do so of their own free will.  Consenting adults.  It’s their choice.  They are NOT being “exploited.”

While many people may not agree with their choice or choose it for themselves, that does not mean others haven’t made such a choice willingly on their own.  Indeed, many have.

Which, coincidentally, brings us to the bombshell…

“I’m going to close with this last story I haven’t told before; I haven’t told it to anybody,” the sheriff then said.  “Why is this so personal to me?”

Well it turns out, as Sheriff McNeil explained, that when he came home after retiring from the military he “found out my ex-wife was working in a brothel.”

As such, the sheriff concluded…

“It’s time to close down these brothels in Lyon County.”

There is so much wrong with this that’s it’s hard to know where to begin.

1.)  Why was this political rally held in a church?  But I’ll leave that for someone else to address.

2.)  It’s clear that Sheriff McNeil, a Lyon County elected official, and Mr. Guinasso, an out-of-town political activist, COLLUDED secretly to place an initiative on the ballot to ban the county’s legal brothels.

3.)  Despite Sheriff McNeil’s claim to have spoken at this political rally in favor of the ballot initiative as a “private citizen,” his anti-brothel remarks clearly centered on his position as the county’s chief law enforcement officer. If that’s not an ethical breach, it should be.

4.)  Sheriff McNeil, in his remarks, failed to disclose to the crowd his $500 contribution in support of the initiative – made just the day before – which NO ONE learned about until this past weekend, including Lyon County’s commissioners.

5.)  With his revelation about his ex-wife going to work in a brothel, it is now painfully clear that Sheriff McNeil used the power, prestige and influence of his public, elected office to exact personal revenge and settle a score against Lyon County’s legal brothels.

An outrageous abuse of power against the powerless – hidden from the county commissioners, the media and the public.

Indeed, had this video not surfaced over the weekend we’d all STILL be in the dark about the sheriff’s personal vendetta and motivations in this matter.

The good news is, even without knowing all these facts the ballot initiative failed in November.

The better news is that Sheriff McNeil lost his bid for re-election.

The bad news is the stench from this Guinasso-gate scandal is going to linger over Lyon County for a long time to come.